To a lot of people, especially in the business world, “feminism” is a dirty word.  It is often thought of as extreme women holding controversial signs, hating men, and going bra-less.  In reality, feminism is so much more than that.  Feminist groups are often the leaders in the gender equality movement.  Specifically, gender equality in the workplace that ensures job positions are granted to those who are qualified, regardless of their gender, and that women in particular are not subjected to disadvantages.

According to a report, “Women 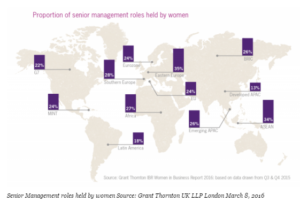 In The Workplace,” 74% of companies claim that they are dedicated to equality in the workplace, yet over 50% of employees think this is untrue.  When it comes to women who are pregnant and expected to be absent from the work, over 90% of women and men feel that taking family leave will hurt their careers.  So although companies claim that they are dedicated to and complying with gender equality, many women still fear having a child and taking a leave of absence will interfere with their jobs and put them at risk of losing their livelihood.  Company management clearly needs to do a better job to reassure women that taking family leave will not result in losing their job.  It is no wonder 82% of women consider an employer’s view on equality and diversity as a key factor in deciding where to apply for jobs.

Fortunately, the incoming workforce of millennials is expected to view gender equality more progressively.  Caroline Turner, an author for the Huffington Post claims that people born from 1980 to 2000 have a completely different view of gender roles and may finally break the “glass ceiling” of inequality.  She claims that since girls and boys were always able to compete, they no longer find it odd or offensive that both genders have the ability to hold a high position in a company. U.S. states are also beginning to make the move towards gender equality through legislation. Massachusetts recently created a law that an employer can no longer ask a candidate’s current or previous salary.  By removing the question asking an individual’s previous pay, companies are forced to decide a salary based solely on a candidate’s credentials, experience, and merit.  The Massachusetts law, set to go into effect in July 2018, is sure to be the pioneer of equality in the workplace, leveling the playing field by removing an application question that may unfairly influence salary and who gets hired.

Thankfully, it seems that women entering the workforce in the coming years will not have to overcome the many barriers women have experienced in the past. When job applications begin focusing on a candidate’s credentials and experience, rather than their gender or previous pay scale, it can lead to companies furthering their success and growth with the help of intelligent and talented women that were finally given a fair chance.