In today’s society, diversity is one of the words that is buzzing around the workforce. When you walk into a building and look around at the people you will be working with, what do you see? Almost half the staff is Caucasian males, while the other half is split between females, minorities and veterans. Big name companies such as Apple, Google, and now Intel have realized this problem and are shelling out serious dollars to solve it.

These companies are few of the largest brands in the world, with some of the best Human Resource departments out there. Chances are, if they are all looking to diversify their companies,  you should too. 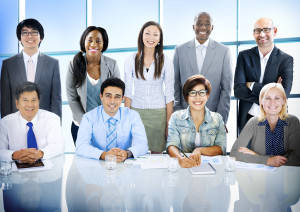 Google has invested $50 million and Apple has invested $150 million, which has all been put towards scholarships and internships that could eventually lead to full time employment. Specifically, the money is targeting females, minorities and veterans to help provide them with a fulfilling and successful future. Statistically speaking, 80 percent of the country’s workforce is Caucasian males, while a quarter of the country’s workforce is African-American and Hispanic workers. The fact that a quarter has to be divided between two races is devastating. In addition, Caucasian male’s have almost a higher salary with a bachelor degree then both Hispanics and African- Americans combined. It’s obvious something needs to change!

Intel has taken diversification to a whole new level; they have invested $300 million dollars into this process which will hopefully help start a ripple effect.  Their new plan is to double the referral bonus when an employee successfully recruits a female, minority or veteran to $4000 dollars. They are taking this leap because of the very few women that are employed by them.  With a minuscule 20% figure, Intel has a long way to go if they want to get to the national average of 47%.  This new plan should help them boost their percentage while retaining current employees due to the generous bonus being offered.

As these percentages still differ immensely from each other, the obstacles become even harder to hurdle. Businesses that aren’t informed about the advantages of having a diverse workforce are only hurting themselves. Our next blog post in our series on diversity,  we will talk about the pros and cons of diversity in the workplace and much, so stay tuned!